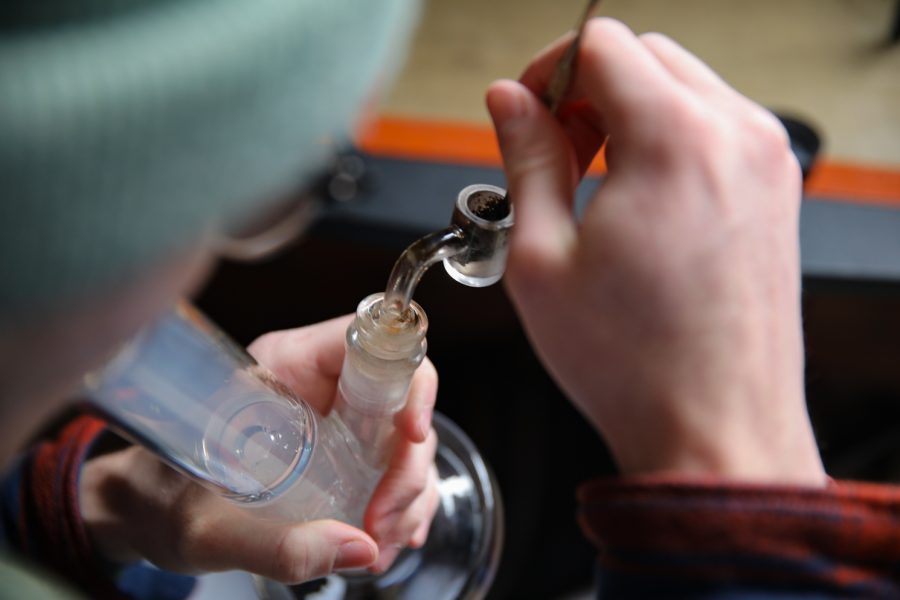 A photo illustration of someone smoking cannabis concentrate out of their dab rig.

The Colorado Board of Health convened for a regular meeting on Wednesday to certify changes to the state’s official policies on medical cannabis, among other agenda items. These changes were created by House Bill 21-1317, signed into law by Gov. Jared Polis in June of last year.

The rule changes, which were unanimously approved by the board, require physicians who recommend medical cannabis to patients over 21 to make a few adjustments to how they do things. Doctors must now review the patient’s full medical history to verify their need for cannabis and recommend specific dosage, products and directions for use.

Since Colorado legalized medical cannabis in 2000, physicians could write a recommendation after diagnosing a patient with at least one of the maladies on a list that includes cancer, chronic pain, HIV or AIDS and PTSD.

For years, physicians did just that: They diagnosed people with one of these various issues and gave them a certificate that allowed them to purchase medical cannabis from specific dispensaries. Now, things are different.

“I think all the people making decisions have little interest in the medical patient community, so by default all the laws tend to favor revenue generation, and that’s usually not the medical patient.” -Dr. Dave Gordon, 4 Pillars Health and Wellness/Functional Medicine

Due to the medical records stipulation, some doctors feel their hands are tied.

“I’ve been practicing medicine for over 30 years, and according to your rule, I’m not a doctor anymore,” Dr. Ronald Frenkel said during the public comment portion of the meeting. “Without medical records, if a patient comes in with an amputation, I can’t diagnose phantom pain. If a patient comes in with a traumatic facial injury, I can’t diagnose it. … You’re telling me that I have to have medical records when a patient’s diagnosis is obvious.”

Additionally, having to recommend dosage, product and directions for use has left some physicians confused.

“There’s 1,000 different ways of using marijuana. How could I possibly write down directions?” said one cannabis doctor who asked to remain anonymous. “I have no idea what products they sell in the dispensaries — I’m a doctor. I don’t go to a dispensary.”

There is a looming fear that the new form of recommendation — dosage, product and THC potency — constitutes a prescription rather than a recommendation. Prescribing any Schedule I controlled substances, which are drugs defined by the federal government as having “no currently accepted medical use” — including cannabis — could put doctors in violation of the Drug Enforcement Agency requirement for doctors to hold a specific license to prescribe controlled substances. The DEA has yet to take any action against physicians who have recommended cannabis.

“Vibrant Health Clinic, (which has) been operating for 12 years in Colorado Springs, (Colorado), shut down because their doctors weren’t willing to write under these new rules,” said Martha Montemayor of Cannabis Clinicians Colorado. “We have had probably about a half-dozen doctors who have dropped out from our group.”

With the new roadblocks between eligible patients and their medical cannabis, some speculate that the state is cynically pushing patients toward the recreational market due to the higher tax rate.

Cory Mitchell of Flower Power Botanicals called the bill “a kind of a tactical move to slowly destroy medical sales” and went so far as to call it “a targeted attack.” Some aren’t as convinced.

“I don’t necessarily think it’s a bunch of people sitting in a room with the priority goal of, ‘We need to break the medical system so we can get everybody on the rec side so we can get all their tax dollars,’” said Dr. Dave Gordon of 4 Pillars Health and Wellness/Functional Medicine. “I think all the people making decisions have little interest in the medical patient community, so by default all the laws tend to favor revenue generation, and that’s usually not the medical patient.”

Benjamin Wann, a 19-year-old medical cannabis patient, challenged the new rules with a lawsuit last July. Two doctors joined Wann as plaintiffs to address the specific issues they face. The lawsuit is still awaiting judicial approval and remains the only current challenge to House Bill 21-1317.

Everything You Wanted To Know About Cannabis