No one should be going to federal prison for cannabis — especially in Colorado, where the plant commands a $2 billion industry. And yet it’s still happening.

Coloradans will be surprised to learn that our U.S. Attorney’s Office has targeted low-level residential marijuana growers for federal prosecution, some of whom receive ten-year mandatory prison sentences. Data reveal those prosecuted are disproportionately people of color and immigrants. Meanwhile, the feds turn a blind eye to the predominantly white-owned cannabis businesses making billions despite violating those same federal laws as the small-time unlicensed grower. Some get rich, and some go to prison for years, despite violating the exact same federal laws.

Prosecutorial discretion is the reason for this. Prosecutors have the power to decide what kind of cases to investigate, who to prosecute and what sentences to seek. Federal prosecutors can target resources where needed and leave states to handle local matters. The U.S. Attorney can decline to focus on drug cases at all — and may instead focus on police violence and civil rights violations, or cybercrime, or domestic terrorism, or other challenges facing communities.

Declining to prosecute federal marijuana offenses is particularly appropriate given the widespread support for legalization nationally and proposals for federal legalization, which appears to be only a matter of time. Tone deaf, our U.S. Attorney continues to put certain people in prison for conduct that likely won’t even be criminal in the near future.

One danger of prosecutorial discretion is that it opens the door to systemic racial bias when unwisely deployed. Troublingly, data reveal that the U.S. Attorney in Colorado has disproportionately targeted people of color for marijuana charges. Federal public defenders and criminal attorneys (the author included) have gathered data regarding federal marijuana prosecutions in Colorado since 2017. The results are shocking: Since 2017, at least 88 percent of Colorado federal marijuana cases targeted people of color. Over that period, at least 106 out of 120 people charged were persons of color (fourteen were either white or the race or ethnicity could not be determined). Given well-established data that white people commit marijuana crimes at the same or greater rates than people of color, there is no acceptable explanation for this racial disparity.

The data show the feds don’t only target larger operations. The overwhelming majority of the 120 cases were small-time grows within the person’s residence, such as plants growing in a basement or garage. Some involved less than a hundred plants. Though some cases technically involved several hundred over 1,000 plants, that number includes tiny seedlings nowhere near production as a “plant.” Regardless, state prosecutors handle cases of this size all the time, so whether the feds or the state prosecutes an unlicensed grow appears completely arbitrary and not based in the size of the operation.

When licensed marijuana businesses have engaged in unlawful sales, as in the notorious case of Sweet Leaf, state district attorneys handled the matter and the U.S. Attorney declined to prosecute. If the state can handle prosecuting a sophisticated business for unlawful cannabis sales, they can certainly handle small, unlicensed residential cannabis grows.

Why would the U.S. Attorney exercise discretion to focus on small-time individual growers and let the state prosecute a multi-million-dollar business violating the same laws on a larger scale? If anything, the federal priority should be the opposite.

Very good arguments can be made that state district attorneys should also exercise discretion to decline marijuana prosecutions. Unlicensed grows can be deterred through civil penalties like any other regulatory violation. Prison need not enter the picture at all in state or federal cases. If there is anything we’ve learned from the failed War on Drugs, it’s that prison doesn’t work and only serves to inflict harm disproportionately on people of color and their communities. But it is also true that misdirecting prosecutorial discretion to target marijuana in the federal context is particularly virulent given the severe consequences of drug-war-era laws, including lengthy mandatory sentences. No rational person who considers the evidence can still think that ten years in federal prison is appropriate for growing marijuana in your own basement.

Cole Finegan, Colorado’s new U.S. Attorney, has the opportunity to change course. Mr. Finegan should commit to immediately cease federal marijuana prosecutions. Full stop. And he should collect and publish data regarding race and other characteristics regarding all prosecutions to address systemic bias. He should deploy resources to tackle issues like civil rights violations by law enforcement, white-collar crime defrauding Coloradans, white nationalist domestic terrorism, and cybercrime and ransomware attacks that cost businesses billions. The U.S. Attorney has the power and resources to investigate these pressing, big-picture problems rather than wasting resources prosecuting small-time marijuana grows. 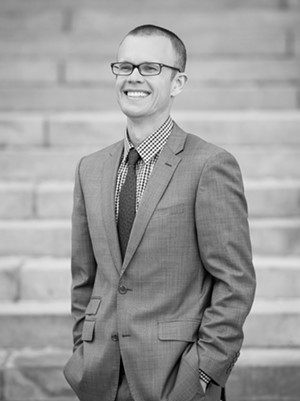 David Maxted is a civil rights and criminal attorney.

America’s failed War on Drugs contributed to skyrocketing incarceration rates and systemic racism in our legal institutions, causing profound damage to people, families and communities. Even as America reckons with systemic racism and the harm the criminal system inflicts, our U.S. Attorney’s Office has continued to inflict that harm. Mr. Finegan should commit to bring this to an end.

David Maxted is a civil rights and criminal lawyer at Maxted Law LLC.

Westword.com frequently publishes op-eds and essays on matters of interest to the community; the opinions are those of the authors, not Westword. Have one you’d like to submit? Send it to [email protected], where you can also comment on this op-ed.