The three newly recognized townships are Rakhma, Hashm al-Zena, and Abda, according to Yair Maayan, who directs a government office charged with regulating Bedouin affairs. About 4,000 Bedouins live in the villages, according to the Negev Coexistence Forum.

The government on Wednesday also advanced a proposal for a new planned Bedouin municipality in the south, one not affiliated with any particular tribe, within 90 days.

Since Israel’s establishment in 1948, authorities have sought to relocate the largely pastoralist Bedouin to recognized towns. But many Bedouin insist on their right to remain where they are, and around 90,000 live in dozens of unrecognized villages scattered across the southern Negev desert.

Much of the construction in these villages is illegal, as the towns do not exist in the eyes of the law. While Israel rarely conducts mass expulsions, it does regularly demolish illegal homes and other structures in the villages. Residents also live without access to the national water and electricity supplies.

Improving the living conditions of Negev Bedouin was a major campaign pitch by Ra’am party leader Mansour Abbas in the previous election. The conservative Bedouin communities are a key constituency for his Islamist faction. 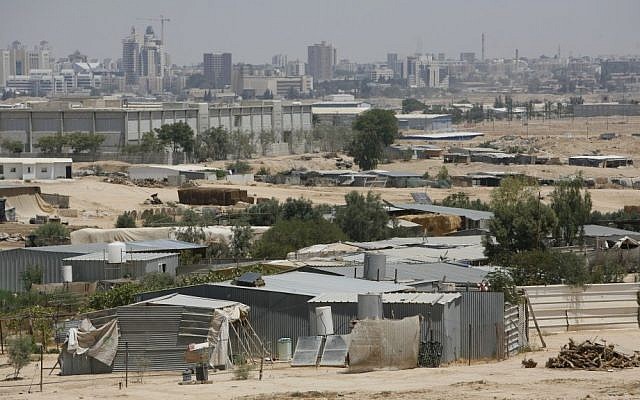 The plans were first scheduled to be approved by previous prime minister Benjamin Netanyahu’s government in December 2020. But the proposal collapsed when pro-settler cabinet members demanded that Israel legalize some illegal Jewish outposts in the West Bank as part of a quid pro quo.

Defense Minister Benny Gantz, whose office is responsible for issuing permits in the West Bank, opposed that effort, according to Maayan.

“At first they asked for just three or four outposts to be legalized, but then it reached into the dozens,” added Maayan. With the cabinet deadlocked, the proposal sank until the new government was established in July.

Bedouin activists expressed cautious support for the decision, although they acknowledged the bureaucratic process would likely take some time. Government offices will now go over on-the-ground urban planning to turn the legalization into workable policy. 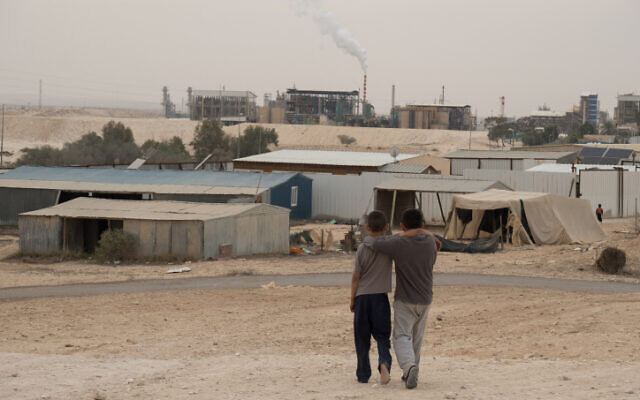 The unrecognized Bedouin villages around the Ramat Hovav industrial area in southern Israel suffer from a high level of air pollution from nearby chemical evaporation ponds and an Israel Electric Company power plant, on December 28, 2017. (Yaniv Nadav/Flash90/File)

“In general, this is a decision to which we can give our blessing. There’s room for criticism, but when it comes to recognition, that’s something we can always support,” said Atiyeh al-Asam, who directs a council that represents unrecognized Bedouin municipalities.

One major hurdle will be seeing how many of residents’ homes are included in the legalization plan, al-Asam said. Unrecognized Bedouin townships are often quite spread out, and the government aims to shrink the sprawl.

“Recognition is the first major step. Now we head to a planning stage, and we’ll see whether the state is well-intentioned or not,” al-Asam added.

“This plan is both an opportunity, and a risk. On the one hand, this plan may lead to real change in the Negev, the restoration of state lands to the government’s hands and the beginning of the process of resettlement of the Bedouin squatters,” said Regavim director Meir Deutsch in a statement.

Deutsch claimed, however, that past governments have allocated “endless” land to the Bedouin, and the current plan might well end up repeating that. “The merit of the government’s plan must be proven by action, not intentions,” he said.

You get Israel news… but do you GET it? Here’s your chance to understand not only the big picture that we cover on these pages, but also the critical, juicy details of life in Israel.

In Streetwise Hebrew for the Times of Israel Community, each month we’ll learn several colloquial Hebrew phrases around a common theme. These are bite-size audio Hebrew classes that we think you’ll really enjoy.


You’re serious. We appreciate that!


We’re really pleased that you’ve read X Times of Israel articles in the past month.

That’s why we come to work every day – to provide discerning readers like you with must-read coverage of Israel and the Jewish world.

So now we have a request. Unlike other news outlets, we haven’t put up a paywall. But as the journalism we do is costly, we invite readers for whom The Times of Israel has become important to help support our work by joining The Times of Israel Community.

For as little as $6 a month you can help support our quality journalism while enjoying The Times of Israel AD-FREE, as well as accessing exclusive content available only to Times of Israel Community members.