Bannering for ‘Legalization for All!’ in Minneapolis 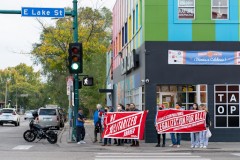 Bannering in Minneapolis to demand legalization for all.
(Photo by Brad Sigal)

Minneapolis, MN – In the early evening of October 13, a group of about 15 people gathered on the corner of Lake Street and Bloomington Avenue in South Minneapolis and held banners that read: “Legalization for all” and “No militarized border.” The action was organized by the Minnesota Immigrant Rights Action Committee (MIRAC).

Over the summer, U.S. Senate Democrats released a budget resolution that would include legalization for millions of undocumented people, including those with DACA or TPS status, as well as many essential workers and farm workers. The bill passed through the first four steps until it reached the Senate parliamentarian, who advised the Senate not to include legalization for immigrants in the bill. The fight is not over, as Democrats are still working on alternate proposals that would still keep some form of legalization for many in the bill.

The bannering event was planned to raise awareness about the bill and to encourage community members passing by to put pressure on representatives to make sure legalization for undocumented immigrants is still included in the bill.

Many passing cars honked in support of the messages on the banners and both drivers and pedestrians who expressed interest were given flyers with information about the bill and a call to action to call, email, or tweet their representatives to demand that they do all that they can to make sure the pathway to citizenship is kept in the bill.