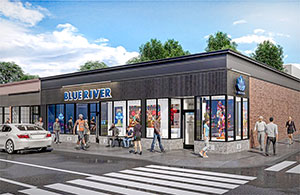 Advesa MA continues its quest to gain approval from the Somerville Licensing Commission to open a retail outlet at 690-694  Broadway.

The City of Somerville Licensing Commission held a special meeting on August 2. The focus of the special meeting was further public debate on the approval of a Group A New Marijuana Retailer License for the cannabis retailer Advesa, MA on Broadway in Ball Square.

Advesa MA has been certified an Economic Empowerment Priority Applicant by the Cannabis Control Commission for demonstrating business practices that promote economic empowerment in commutes harmed by cannabis prohibition.

“Starting from my team’s earliest days in the cannabis industry, it has been a dream of all of ours to open and operate a cannabis store that embodies economic empowerment and equity,” said Advesa MA part-owner Jessica Pelletier.

Over the past few months, Advesa MA has held virtual community outreach, open houses, informational meetings for fellow businesses in Ball Square. According to Pelletier, sustained community outreach including a petition with 387 signatures from residents supporting the Advesa location in Ball Square and a neighborhood meeting on July 31 yielded a breakthrough in understanding.

“Advesa does not just want to be another business in Ball Square, but an active member of the square and good neighbor to the residential neighbors and businesses alike,” Pelletier said.

According to Pelletier, Advesa more than meets the criteria set forth in the licensing ordinance and that they have developed a good relationship with the surrounding community despite what the local opposition group would like the commission to believe.

“As Advesa is an economic empowerment applicant and is willing to meet the conditions set by the licensing commission, we want to make sure that any restrictions that are placed on us are enforced on other businesses within a mile of us so there are no competitive advantages,” said Advesa MA part-owner Shanel Lindsay.

Lindsay says that her reason for voicing this concern comes as a result of the many requirements, constraints and regulations that are enforced by the state on Economic Empowerment Priority Applicants, which could make Advesa less competitive when compared to other businesses.

The public comment portion of the meeting provided a wide range of perspectives on the issue.

“If Advesa is approved at the current size, it will be the largest store in Ball Square by far, please shrink the square footage” said Somerville resident Bodell Thomas.

Other reservations were voiced by residents.

“It was a really productive and cordial discussion with Advesa,” said Sasha Chanoff. “The concerns that I raised and that I continued to have are around the size and the points of sale. As a father I walk around ball square with my kids and I ask that you not approve this license as is.”

According to Chanoff, who lives just a block from Ball Square, says he is concerned about the largest retail space being a cannabis store. He says that when he reviewed the impact report of the NETA dispensary in Brookline, many who approved that license did not realize the impact that would be had on the surrounding area.

While there were reservations, there were also strong voices of support for Advesa from Ball Square residents.

“I met these guys at their open house and I believe they have the right attitude and will be a positive addition to the cannabis conversation as well as my Ball Square Neighborhood,” said David Anneck.

Anneck, a board-certified practicing psychiatrist, says that while there are dangers with cannabis usage, he believes that Advesa has wellness and a mature perspective at heart.