It’s a fact of investing life that growth stocks are easier to find in growing industries than in mature or stagnating ones. That’s why the cannabis industry is one of the first places I look when I’m scanning for potential new investments.

This trio of marijuana companies, in particular, is worth following in August. Each is facing a handful of new developments that will shake out over the summer. While the stocks I’ll discuss today might not be the safest investments in the market, they’re definitely worth investigating if you’re eager for some exposure to growth in the near term. 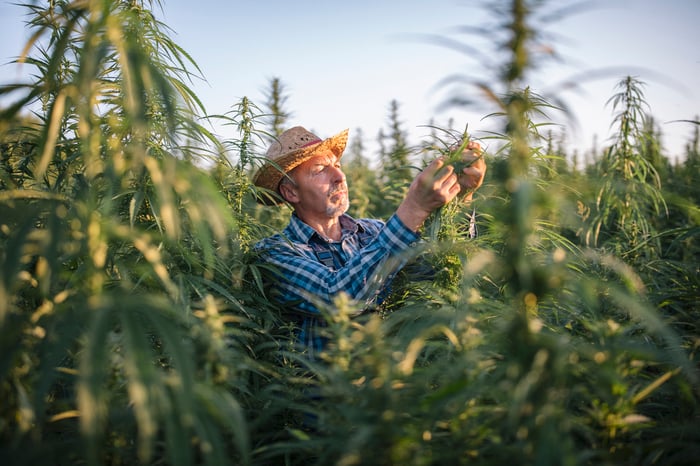 With its 83 dispensaries in Florida and a small but growing number outside the state,  Trulieve Cannabis (OTC:TCNNF) is one of the fastest-growing medicinal cannabis operators in the U.S. And Trulieve’s growth is poised to accelerate thanks to its investment in new hubs outside the Sunshine State. Its recent entry into the West Virginia market and the scaling up of its wholesale operations in Pennsylvania and Massachusetts will provide a lot of new opportunities in the near future.

By the end of this year, the company could be making as much as $850 million in revenue. That’s quite a bit more than its trailing-12-month revenue of $619.3 million, and it’d be just the start of what management has planned.

Specifically, Trulieve has an acquisition pending for Harvest Health & Recreation, another multistate cannabis operator. The transaction could close in the third quarter, and if it goes through, it’ll open up an entirely new hub in the Southwest region of the U.S., where Trulieve doesn’t currently have a presence.

Finally, if cannabis is legalized nationwide, Trulieve is exceptionally well positioned to capture recreational use market share in Florida using the same strategy it used in the medicinal market. Its medicinal cannabis dispensaries cover the vast majority of the state’s largest population centers, and its stores are already equipped to handle significant ongoing demand from their regular customers.

So, the company doesn’t face major barriers to serving additional demand when or if the recreational marijuana market comes online. And its extensive retail presence acts as free advertising to build consumer awareness in advance of a change in legislation. In short, the next few years could be even better than the company’s recent breakout from Florida, and that’s worth paying attention to.

Planet 13 Holdings (OTC:PLNH.F) is another up-and-coming cannabis cultivator. But unlike Trulieve, it’s a small-scale operator that’s focused on building out individual superstores, like its flagship location near the Las Vegas Strip. Using the mountain of revenue — $63 million — generated by that store in 2019, Planet 13 is now branching out with a new mega-dispensary in Santa Monica, Calif., which will be its third location in total (it has one more in the Vegas area as well). The California store opened at the start of July, so its first revenue should be reported in the company’s third-quarter update.

The investment thesis for Planet 13 is that it’s still extremely small, so it will be able to grow very rapidly and make early investors rich over the next few years. Since the company’s current plans call for expanding to reach at least eight superstores in the next five years, it wouldn’t be surprising if its revenue multiplied several times over before 2025.

But even with its Las Vegas store alone, Planet 13 should be posting strong revenue growth compared to 2020 as tourism returns. In Q1, its revenue was up 41.8% year over year — and there’s a good chance that’ll be the slowest growth it reports until 2022. 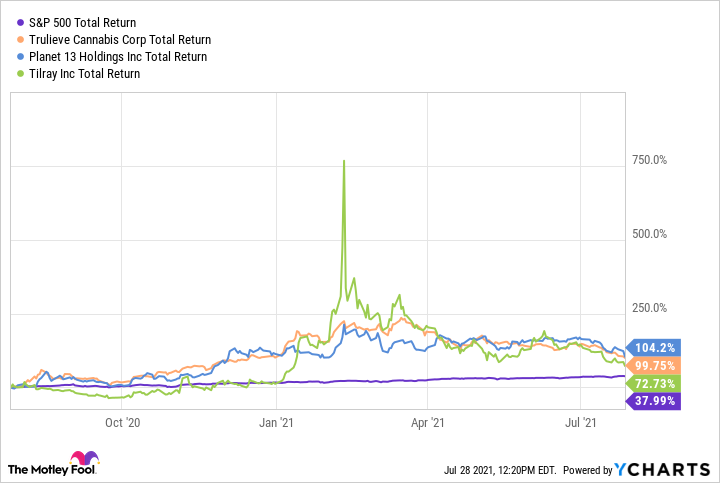 Multinational cannabis giant Tilray (NASDAQ:TLRY) is perhaps the world’s largest marijuana company. With its cultivation and distribution footprint spanning North America, South America, and Europe, few of its competitors have as broad a reach. And thanks to its recent acquisition of Aphria, it even has a craft beer business that operates in the U.S., generating $15.9 million in net revenue in the fourth fiscal quarter of 2021.

Tilray’s appeal is that it might be able to leverage economies of scale and favorable tariff rates within the E.U. to grow and sell cannabis far more cheaply than its competitors. Likewise, its extensive distribution network and supply chain could penetrate markets more rapidly and more deeply than smaller companies can. Right now, it has a leading market share in Canada, where it reported $222.93 million in trailing revenue as of late May.

Compared with Planet 13 and Trulieve, Tilray will likely grow its revenue a bit more slowly in the short term. According to its latest earnings report, Q4 revenue rose to reach $142.23 million in 2021, an increase of 25.27% year over year. If it can continue to expand at this rate over the long term, it could post the consistent earnings growth that more conservative investors crave. More importantly, if cannabis is legalized in the U.S. or key European markets, no company is better positioned to gain than Tilray.