The Vineyard’s first cannabis dispensary quietly began doing business over the weekend, while a second is planning to launch in early August. 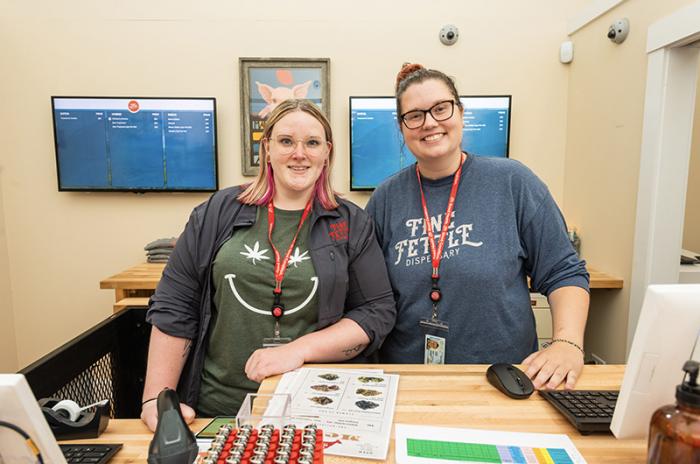 Crosby Nest and Bethany Eyrick are part of a small team of employees at the new shop.

Meanwhile, an adult-use dispensary on Mechanics street in Tisbury, newly named Island Time, is also nearing its final regulatory hurdle. Both businesses are slated for state retail inspections this week, and plan to begin adult-use sales early next month.

Island Time is owned by Geoff Rose through his company Patient Centric of Martha’s Vineyard, founded in 2015.

Patient Centric was also approved by West Tisbury officials to operate the State Road dispensary, before Mr. Rose sold that part of his business to Fine Fettle owners FFD Enterprises earlier this year.

The transaction included the former Patient Centric cultivation facility in West Tisbury, a leased property on Dr. Fisher Road. The marijuana grown there will supply not only Fine Fettle but Island Time as well, under an agreement between the two companies, Mr. Rose said.

Because cannabis is still outlawed at the federal level and is illegal to bring to the Vineyard by water or air, all products sold at the dispensaries must be produced on Island. 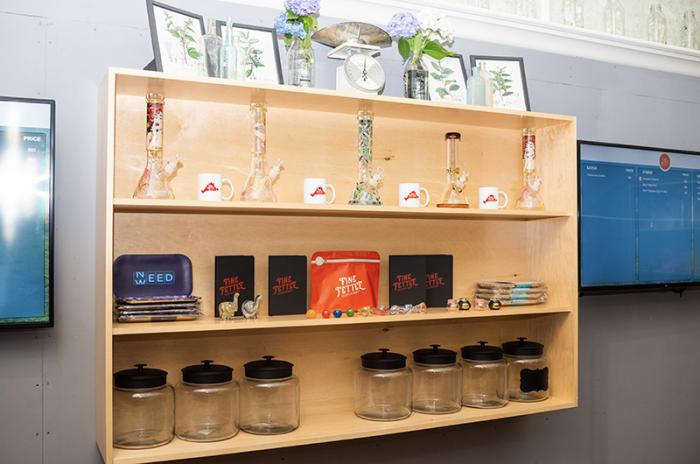 Dispensary will sell accessories as well as cannabis.

A three-state network of cannabis enterprises based in Connecticut, FFD also operates dispensaries in Connecticut and Rowley and a product factory in Rhode Island.

“It’s such a small, family-owned business — there are only four or five executives,” he said. And despite the company’s recent growth, he said, he never has to wait for long to get one of them on the phone.

Once open for adult use sales, Mr. Deyette said, Fine Fettle will continue to operate by appointment only, under a town requirement expected to last at least six months.

Visitors to the new dispensary are greeted first in the parking lot, where their appointments, ID and medical cards are checked, and a second time when they sign in at reception inside the first of the building’s two entrance doors.

Through the second door, medical patients are served at a dedicated counter while adult-use patients will be directed to a separate retail area. 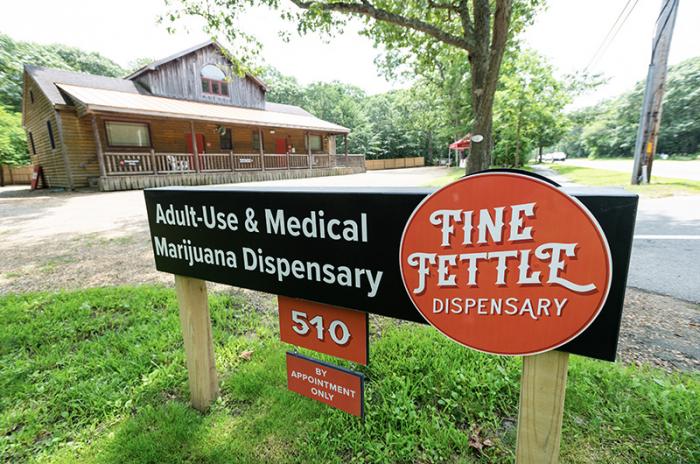 Fine Fettle is the first cannabis dispensary to open on the Vineyard.

Framed slogans on the wall encapsulate Fine Fettle’s business philosophy, Mr. Deyette said: Do Right By Everyone; Wake Up Excited in the Morning; Employees Are Encouraged to Create Change.

One of Mr. Deyette’s own contributions to the Island dispensary is a loyalty program for both medical and adult-use customers, who can earn points toward prizes by purchasing cannabis (medical patients only) or accessories (all customers).

He’s also instituting a series of daily promotions, in which customers can earn points by bringing in, for instance, their leashed dogs on Mondays or nonperishable food for the Island Food Pantry on Thursdays.

“Any little difference we can make makes me feel good,” Mr. Deyette said. “We’re all about connecting.”

Islanders with local identification are entitled to a 10 per cent discount (for adult-use customers, this applies to accessories only) and Island residents make up nearly all of the local Fine Fettle staff.

“It’s a diverse team of people who were born here or are long time washashores,” said Mr. Deyette, who said he washed ashore himself a decade or so ago.

“I came up for a wedding and never left,” said the former teacher, who since moving to the Vineyard has worked for the Mansion House and the Harborside Inn before starting with Fine Fettle in April.

The company currently employs 16 people on the Vineyard, 10 at the dispensary and another six in cultivation, Mr. Deyette said.

“It was really wicked, wicked awesome, and they were very professional,” said Mr. Soriano, who uses a wheelchair. Buying medical cannabis on the Island saves him hours of travel to reach mainland dispensaries, he said.

“I can get my supplies locally now, which is awesome, and makes my journey more pleasant,” he said.

Update On The Legalization Of Marijuana In Connecticut - Cannabis & Hemp

The magazine is transforming into a retail brand.