This was a disappointing week for cannabis investors, with the market reacting very poorly to the unveiling of the Cannabis Administration and Opportunity Act (CAOA) that Senator Chuck Schumer shared in draft form. Senators Schumer, Booker and Wyden have invited stakeholders to make comments through September 1, and then they intend to introduce a final legislative draft.

We had thought that the market would react better to the long-awaited proposal, though we have consistently suggested that the legislation isn’t likely to advance. Apparently investors seized upon this point, especially with respect to the large Canadian LPs, which sold off the hardest. The leaders of these companies continue to assert that they will be able to enter the American market, but this continues to look very unlikely in the foreseeable future.

Bipartisan discussions and even votes (SAFE Banking) in the House have encouraged us that progress on the federal front will eventually be made, and we view the introduction of CAOA as a very meaningful step to opening dialogue that has been stifled in previous Senates. With that said, we don’t expect that this comprehensive legislation will make progress and we question Schumer’s strategy to tackle so many complex issues at once rather than building a consensus on issues where there is likely a good chance for common ground, like research and financial services.

From our perspective, the extreme negative reaction makes little sense for most cannabis stocks, as the investment thesis doesn’t rest upon near-term legalization, except for perhaps the large Canadian LPs. Additionally, there weren’t any real surprises in the proposal except for perhaps the potential involvement of the FDA as a regulator, an issue about which we have cautioned readers. We continue to expect that federal legalization will take several years, and the FDA isn’t likely to be involved with the industry until that time.

Looking ahead, we are anticipating a robust earnings season will begin in three weeks. We are hopeful that investors will begin to better understand that the current cannabis market is extremely bullish for American operators and the ancillary companies that provide goods and services to them. The shift from the illicit to the state-legal cannabis market continues, and an increasing number of states are moving forward with adult-use programs. In 2021, we have seen the legislatures in Connecticut, New Mexico, New York and Virginia all approve legalization, and Ohio is about to join Maryland and Rhode Island where legislators are pursuing similar action. Expansions in existing states and the addition of these new states will likely fuel strong growth for many years to come.

The negative reaction to CAOA is a reminder to us that prognosticating is no easy sport. While we misjudged how the market might react to what we anticipated would be legislation viewed unlikely to advance, we remain confident in our bullish outlook grounded in the positive industry fundamentals. We are also hopeful that the discussions in the Senate could lead to advancement on at least some issues where there is bipartisan appeal.

The Parent Company went public through the SPAC process six months ago and has seen its stock price decline 50% subsequently. The company has maintained a strong cash position of $281 million while the California market has improved. The Parent Company appears to be executing its business model carefully despite experiencing a turbulent trading debut. Having just announced the launch of the new Chula Vista delivery hub, the company expects to service approximately 60% of the California’s population. Canaccord estimates The Parent Company will generate $53.1 million in its upcoming Q2 report, up 33% sequentially. 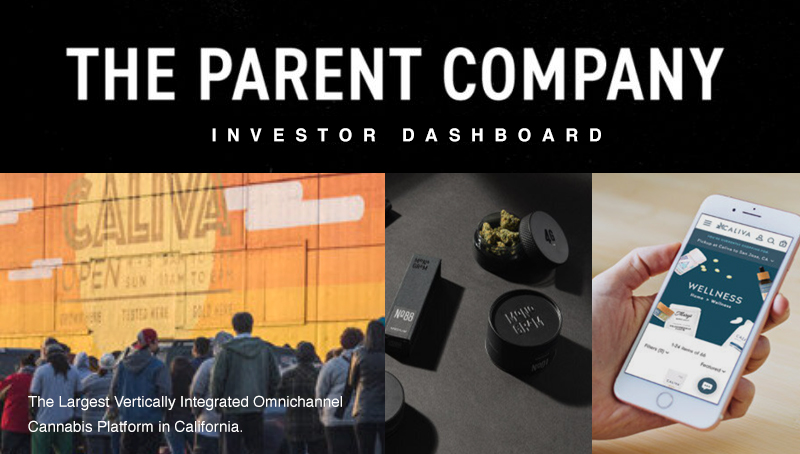 Get up to speed by visiting The Parent Company Investor Dashboard that we maintain on their behalf as a client of New Cannabis Ventures. Click the blue Follow Company button in order to stay up to date with their progress.