YPSILANTI TWP, Mich. (FOX 2) – A 79-year-old grandma in Ypsilanti Township is fighting her city over the legal amount of marijuana she can grow in her home.

Judith Pontius has 55 medical marijuana plants growing inside her home but the city says she can’t that many plants and ordered her to stop. She fought the city and got lower-level courts to agree with her. But the state supreme court? That’s where she lost her fight.

Well, maybe not quite. Pontius still has the pot in her house. Now she has the support of protesters outside the Washtenaw County Courthouse as she faces 93 days in jail.

Pontius worked for the city that is now coming after her for 31 years as an appraiser. She retired and now she’s a caregiver who grows medical marijuana for family members.

More than half of Michigan’s $3.2 billion weed industry came from illegal sales

Marijuana advocate Joe Sullivan said the township is picking on this woman.

“It’s more of a township just picking on her because she’s a caregiver for cannabis – a cannabis caregiver,” Sullivan said.

The problem isn’t with growing or using marijuana for personal use – that was legalized in 2018 – but caregivers have to grow in light industrial areas and not in personal homes.

“The municipalities do have a right to make zoning ordinances. However, they do not have a right to ban, penalize, or impose unreasonable restrictions on the grower,” said Jenny Sullivan.

Pontius’ attorney, Barton Morris, said that’s the crux of the argument and the city is targeting her.

“This effectively eliminating Judith Pontius because she can’t afford to go into an industrial zone. She can afford it in her home, that’s it,” he said.

After several courts sided with Pontius, the township appealed to the Michigan Supreme Court where the city got its way.

While she lost in court, her 55 plants remain in the house. On Wednesday, the judge set a date for a hearing to determine if granny is in contempt of court. If the judge rules she should be held, she could go to jail for 93 days and face the destruction of her plants.

Pontius admits she is a little bit nervous about going to jail but insists that her 55 marijuana plants are for caregivers and personal use.

“It’s for my own use. I do edibles and it takes a lot of plants to make edibles from it. I only do like three a year, so I do need this many for my own use,” she said.

She said cities and townships like to control caregivers and that municipalities are fighting caregivers.

“Caregivers need to help patients. It’s a lot cheaper to get it from a caregiver than to go to a dispensary,” she said.

As for if she’s nervous about going to jail? She’s got something for that.

“I’ve got some gummies for that, upstairs,” Pontius said.

The township would allow her to continue growing her medical marijuana if she only had 12 plants but she says that’s not even enough to make edibles. 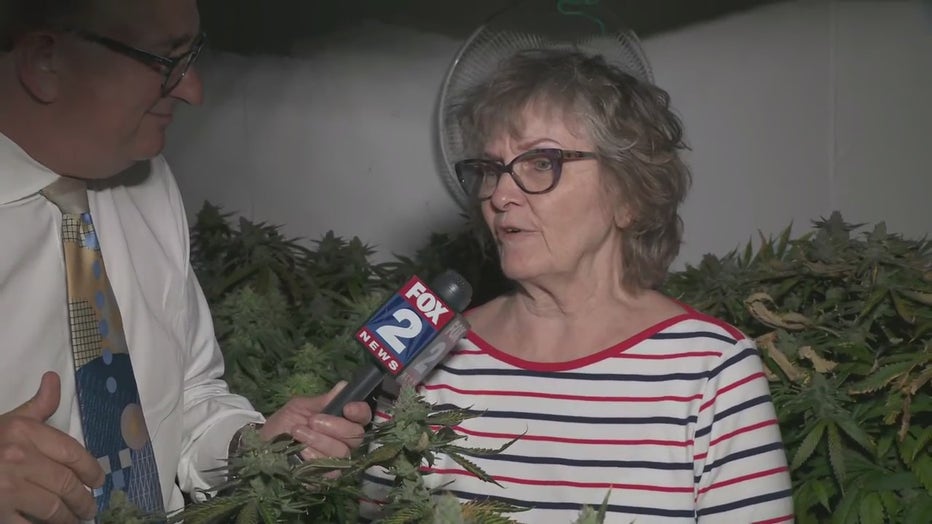 Judith Pontius is 79 and grows 55 medical marijuana plants in her basement. She says they’re all necessary but the city is fighting to get her to remove them all.