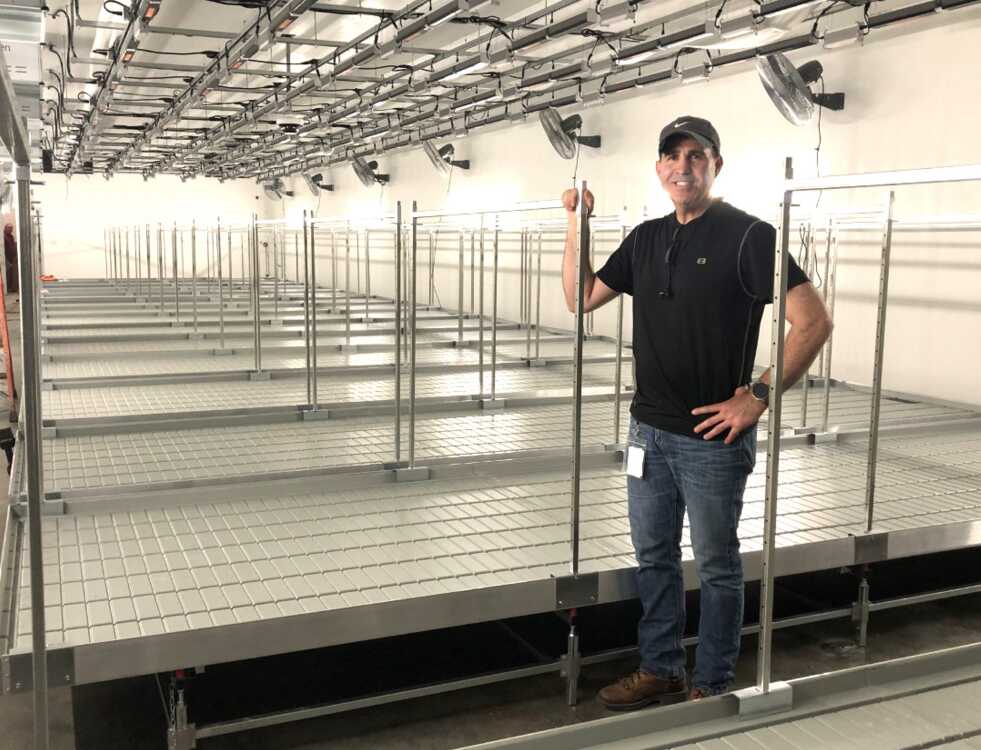 Organic Remedies-Missouri facility manager Scott Arnzen stands in one of the flower rooms that will be part of a 30,000-square-foot cultivation area at the ORMO facility in Chaffee, Missouri, where indoor marijuana crops will be grown and harvested. Arnzen formerly worked for S&W Cabinets in Chaffee, which used the ORMO building for cabinet assembly and storage.

CHAFFEE, Mo.  At one time, the Columbia Sportswear plant in Chaffee employed more than 400 people and produced about a third of the apparel company’s consumer goods.

But when the plant closed in early 2000, Chaffee  and the surrounding region  lost one of its largest employers.

And except for some cabinet assembly and warehousing by neighboring S&W Cabinets, the 75,000-square-foot industrial building on Cummins Drive near the town’s northwest edge has remained mothballed and mostly vacant since then.

That will change this summer when a new company, Organic Remedies-Missouri (ORMO), starts making products for one of Missouri’s fastest-growing industries  medical marijuana.

ORMO is a partnership between a Missouri investor group and a sister company in Pennsylvania and was formed soon after Missouri voters approved the production and distribution of medical marijuana in 2018. It sought and received a pair of licenses from the Missouri Department of Health and Senior Services to cultivate and manufacture cannabis in Chaffee.

The 75,000-square-foot Organic Remedies-Missouri building in Chaffee, Missouri, once occupied by Columbia Sportswear, will soon be cultivating and manufacturing medical marijuana, pending an inspection by the Missouri Department of Health and Human Services, possibly as early as this week.

The company is spending about $20 million to retrofit the former Columbia Sportswear plant to make it suitable for marijuana cultivation and processing. Penzel Construction of Jackson, which built the original facility for the apparel manufacturer in 1988, is the project’s general contractor.

“It’s a huge investment in the community and a huge investment for us,” said ORMO principal and spokesman Ray Boyer. Boyer splits his time between Pennsylvania and Missouri, and has been working on the Chaffee project almost from the beginning.

“One of the reasons for picking Chaffee is it’s in an area that needs economic and community development,” he said. “And my job is to create jobs.”

Boyer said Chaffee reminds him of his hometown, McKeesport, Pennsylvania, where thousands of steelworkers lost their jobs when U.S. Steel closed its plant there in the 1980s.

“I got involved in marijuana growing to create jobs, good paying jobs with good benefits,” he said. “That’s what I saw here in Chaffee. People here come from very good families and have great work ethic and great values. The only thing missing was jobs. There was this empty plant that used to provide a lot of jobs for people in the textile business that we could reclaim and make it into something.”

Another reason Boyer is involved in the medical marijuana industry is to produce a product that benefits people with a variety of chronic and terminal conditions. He believes it would have helped his sister who died at age 49 of a rare form of cancer 23 years ago when all forms of marijuana  both recreational and medicinal  were illegal.

Join the B Magazine newsletter

The weekly newsletter focused on the business of Southeast Missouri.

“It could have had a huge impact for our family,” he said.

ORMO itself is expected to have a big impact on Chaffee.

“This will create good jobs for the citizens of our community and will help improve other things as well,” the mayor continued. “This can mean an improved revenue stream for an expanded police force, better equipment for our volunteer firefighters (and) street and park improvements.”

Ron Senciboy, Chaffee Chamber of Commerce president, said ORMO will be the town’s biggest employer once it reaches full production in a few months.

“We welcomed Organic Remedies when they first came to town a year or so ago with their proposal and we’ve been onboard ever since,” he said.

ORMO has joined the Chaffee and Cape Girardeau chambers of commerce and Boyer said the company plans to join other area business chambers as well.

Pending approval by state inspectors, which could happen as early as this week, Boyer said the Chaffee plant could be operational almost immediately. Crops will be grown from seeds and cuttings in ORMO’s cultivation  or flowering  rooms with the first harvest in two or three months.

In the meantime, ORMO will be able to produce a variety of medical marijuana products under authority of its manufacturing license using raw materials purchased from other licensed marijuana cultivators.

“Anything that’s sold at a dispensary, we’ll be able to make,” Boyer said.

“We will also sell wholesale products to other dispensaries,” Boyer said. “I call them ‘competimates.’ We’re competitors, but we’re all trying to grow an industry, so we have to work with each other and we look to create great relationships with them.”

ORMO’s cultivation areas are being built in two phases. The first phase is complete and ready for planting once state approval is received. The second phase, Boyer said, is scheduled for completion by the end of August and will give ORMO a total of 30,000 square feet of tray space for crop cultivation.

“We won’t be outfitting all the rooms at first because we don’t need them right now,” he said. “We’ll build on demand, and we’ll have a perpetual inventory.”

Indoor crop production has several advantages over outdoor cultivation, Boyer said. By growing marijuana indoors, ORMO can control the environment (temperature, irrigation, fertilization, humidity, lighting, etc.) and can avoid potential crop damage from insects and possible pesticide drift from nearby farms. Also, with indoor cultivation, ORMO expects to harvest as many as five or six crops annually in each of the plant’s dozen flower rooms.

The company plans to expand its workforce as it ramps up its cultivation and production operations. So far, ORMO has hired a facility director, processing manager, cultivation manager, inventory control manager, chief security officer and a few other key staff members.

Boyer anticipates an initial workforce of about 150 employees and says there will be a need for around 75 more workers once the second cultivation phase is operational in a few months.

“We also want to create a workforce development program to train workers not only to excel in our business, but to take those skills and go elsewhere, too, if we don’t have an opportunity for promotion,” he said.

ORMO plans to host a job fair for a variety of positions in the coming weeks.

“We haven’t set a date for it yet, but as soon as the state inspection is over, I’ll probably schedule it for the end of July or first part of August,” Boyer said. “We already have a lot of resumes and we’ve reached out to everyone who has sent them to say, ‘Hold on and we’ll get back to you.'”

As the marijuana industry grows in Missouri, Boyer said ORMO expects to grow with it.

“We hope to secure one additional cultivation license in Chaffee, which would create a lot more jobs there,” he said. “We’d have to build on, but we have the space to do it.”

Looking for more business news? Check out B Magazine, and the B Magazine email newsletter. Go to semissourian.com/newsletters to find out more.

Pot, Or Not: Which Union County Towns Will Allow Marijuana Business? - TAPinto.net