Cannabis industry lawyers can be sanctioned


About 70 applicants are waiting on the Georgia Access to Medical Cannabis Commission to award licenses to six companies. They will be allowed to grow and manufacture medical marijuana oil that can have no more than 5% THC, the compound that gives marijuana users a high.

These companies will have one year to begin operations. Each one will be allowed to open five dispensaries, providing for registered patients suffering from conditions such as seizures, terminal cancers and Parkinson’s disease.

Medical marijuana oil companies need attorneys to make sure they’re following Georgia’s laws, said Kevin Quirk, CEO for Harvest Connect, one of the companies that applied for a state license. But he said he doesn’t need lawyers to run his business.

“We know how to bring quality product to Georgia patients without getting the lawyers involved,” Quirk said. “I personally don’t think it’s going to affect us very much.”

Some states amended their rules

At issue is Georgia’s rule of professional conduct for lawyers. It says a lawyer cannot counsel a client to engage in conduct the lawyer knows to be criminal.

That creates an ethical dilemma for Georgia lawyers in the medical marijuana field because federal law classifies marijuana as a Schedule 1 drug. Anyone found selling enough of it can be charged with a felony and face prison time.

To solve any potential problem, the State Bar of Georgia asked the Supreme Court of Georgia to adopt an amendment granting exceptions to lawyers assisting clients in fields permitted under Georgia law, but which could be criminal under another law.

In its request, the State Bar noted that the medical marijuana industry is highly regulated and touches on dozens of areas of the law.

“It is certainly in the public interest for lawyers to be involved,” the State Bar’s filing added. “Aside from the benefit to Georgia businesses that hope to engage in the cannabis business, lawyers can ensure that the industry is regulated as the Legislature intended; they can also ensure that the statute is not abused by those who would misuse it for criminal enterprise.”

Of the more than 40 states that have legalized the use of medical marijuana, about half amended their rules to allow lawyers to counsel clients in the cannabis industry. Others have issued advisory opinions authorizing an exception, the bar said.

Georgia is now the fourth state to deny an exception, joining Oklahoma, South Dakota and Mississippi, according to court records.

‘This opinion creates a quandary’

In their unanimous, unsigned opinion, the Supreme Court’s justices said they understand the desire of some Georgia lawyers to assist the fledgling cannabis industry.

“But this court has long prohibited Georgia lawyers from counseling and assisting clients in the commission of criminal acts,” the opinion said. “The passage of a Georgia statute purporting to permit and regulate conduct that constitutes federal crimes does not change that long-standing principle.”

The court noted that the State Bar’s request was not limited to conduct related to medical marijuana oil. “Indeed, the proposed amendment is quite broad and might well apply to a wide range of conduct constituting a crime under federal law that simply has no corollary state criminal sanctions,” the court said.

Its former executive director Jeff Davis, who was at the State Bar when the amendment was formulated, said the organization simply sought a “safe harbor” that allows lawyers to provide much-needed advice to medical marijuana businesses. Jeff Davis (second from left) is the former executive director of the State Bar of Georgia and former director of the state Judicial Qualifications Commission. In this photo, he and members of the judicial watchdog agency accept the Georgia First Amendment Foundation’s 2014 Freedom of Information Award. Also in the photo, from left, are Lester Tate, Robert Ingram, Judge Brenda Weaver, Richard Hyde and Judge John Allen. (AJC file)

“This opinion creates a quandary for lawyers who have advised or plan to advise Georgia companies that are trying to comply with state law,” Davis said. “By subjecting lawyers to disciplinary sanctions, it potentially creates a situation where these companies can’t seek legal advice.”

Companies also would be hard-pressed to retain out-of-state lawyers to assist them in Georgia, Davis added. That’s because many are not licensed to practice here and, even if they are, they have to adhere to the same rules of professional conduct, he said.

State Rep. Micah Gravley said the goal of Georgia’s law is to provide safe and lab-tested oil for those who need it. 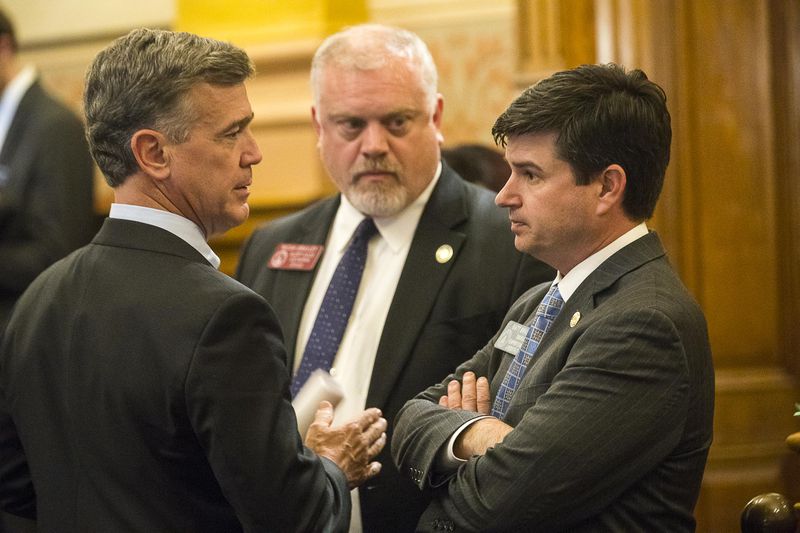 “We wanted to do it in a legal manner, and we went about it the right way,” said Gravley, a Republican from Douglasville who has sponsored medical marijuana oil bills. “We debated this in the halls of our Capitol, and we changed the law here in Georgia. It seems as if we’re met with roadblock after roadblock when we simply want to help people in need.”

Weed is legal in CT, but some in Danbury area don't want it sold in their towns.