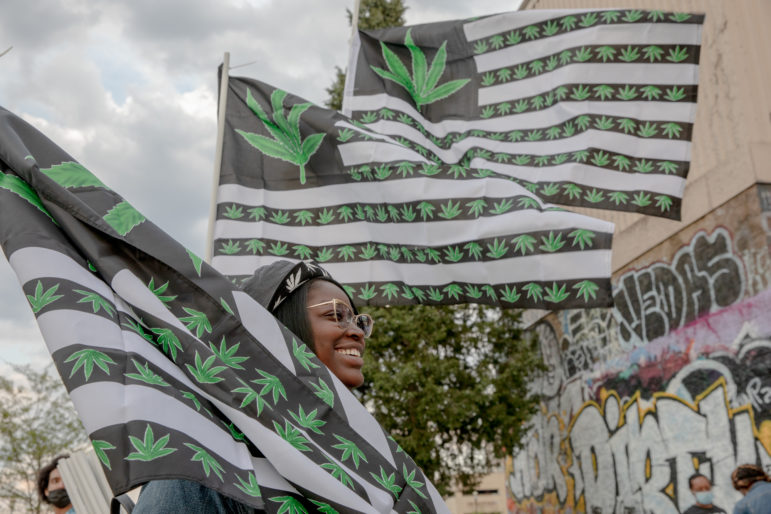 A person of Hartford, who didn’t want to be named, holds a flag with cannabis leaves. “We need that legalization ASAP. Weed is not the problem,” the person said.

We need to legalize marijuana in Connecticut. Bill 888: An Act Responsibly and Equitably Regulating Adult-Use Cannabis, a Senate bill, calls for the legalization of recreational marijuana for individuals 21 and older. Action needs to be taken now. Because the bill didn’t pass in the regular legislative session, it must be considered a priority in a special one.

Throughout history and continuing through today, marijuana arrests have been more prevalent among Black people than white, and have resulted in longer sentences for Black people than their white counterparts. This is despite the fact that white and Black people use marijuana at about the same rate, according to the ACLU. The justice system is terribly racist in many ways, and in wake of the BLM movement, many politicians said they wanted to make real change for Black people. This is a concrete way to reform a part of the system, and abolish something that disproportionately negatively affects Black people.

It seems that the criminalization of drugs only hurts people, which makes me wonder why they’re illegal in the first place. Isn’t the U.S. all about freedom and getting to choose what you want? It seems hypocritical to then control the use of substances. Other countries have legalized marijuana, and Portugal has legalized all drugs for personal use. Are citizens in the U.S. less free than those in Portugal? Do we deserve to have our choices be controlled by the government? No.

Connecticut is supposed to be one of the most progressive and democratic states. How is it that we have not passed a bill that benefits everyone, specifically minorities, and gives more freedom to the people?

Not only would legalizing marijuana make the justice system more fair, it would also actively benefit individuals who use it. Easier access to marijuana would aid many, as it has numerous helpful uses. Many say it helps control anxiety, which is a growing issue in young people today. It also has been scientifically proven to have many medical benefits, one being relieving pain. However, it’s true that there are downsides to marijuana. One of the biggest worries is the effect on lungs when smoked. This argument doesn’t take into consideration that it can be added to a food and eaten, which does not harm the lungs. If consumed correctly, marijuana can be very healthy.

Essentially, it can only help people to legalize marijuana, and is the right thing to do. If legislators really want to serve the people, they will pass Bill 888.

Elizabeth Horan is a student at Hall High School in West Hartford.

CTViewpoints welcomes rebuttal or opposing views to this and all its commentaries. Read our guidelines and submit your commentary here.

Colorado lawmakers passed 502 bills during this years legislative session. Here are 65 you need to know about.