What do marijuana-sniffing police dogs do when pot is no longer illegal?

They retire, as area police departments are finding out.

At last count, a total of 12 pot-sniffing dogs have been forced into retirement or transfer in Richmond, Henrico and Chesterfield, while another 13 serving with the Virginia State Police are out to pasture.

With a new Virginia law legalizing adult possession of small amounts of marijuana for recreational use starting July 1, the trained weed-detecting K-9 noses no longer will be used to establish probable cause for a drug search.

All five of the Henrico Police Department’s marijuana-detecting dogs have been retired and taken home by their K-9 handlers to be cared for as they await a retirement ceremony to be held at a future date, said Lt. Matt Pecka of the department’s Office of Public Affairs.

In March and April, the police division purchased and trained three new narcotics K-9s. The dogs, along with their handlers, participated in a narcotics detection school earlier this year, he said.

“Both have completed the necessary school and training to receive certification and will provide a supporting role to Henrico County and the community at large.”

All of this comes at a cost.

According to the Henrico police administration, the cost of the three new canines — two Belgian Malinois and a Dutch Shepherd — ranged from $6,500 to $7,250 each.

Lt. Pecka said most of the dogs are between 1- and 2-years old. There’s no set age or length of service dictating when they retire, he said.

In Richmond, four dogs “previously working as drug detectors have been removed from service due to the change in marijuana laws in Virginia,” said James R. Mercante, acting director of public affairs for the Richmond Police Department.

“Three canines have been retired from service and one was donated to a police department in the Midwest where the narcotics sniffer’s services can be used.” 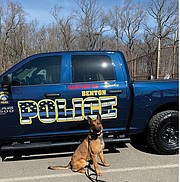 He said retraining a marijuana-sniffing K-9 is not a best practice, but finding another role for that dog elsewhere is.

Three of Chesterfield County’s five narcotics-detecting dogs are being replaced because of the law change, said J. Elias O’Neal, public information officer for the county. Police handlers have been working

Depending on the breed, the dogs can work until they are 8- to 12 years old, when they usually retire with their handler or are adopted into a good home.

He said two of the marijuana-sniffing dogs were returned to the kennel where they were purchased and the third was sold to a law enforcement agency in another state where marijuana is still illegal.

Virginia State Police is retiring 13 K-9s. New replacement dogs have been brought in for training with their handlers to detect drugs other than marijuana, including cocaine, heroin and methamphetamines.