Last week, we discussed how 98% of all cannabis sales in Florida by volume are coming from MSOs. In sharp contrast, they have remained mostly on the sidelines when it comes to what has rapidly developed into the largest legal cannabis market, California. A few have made early moves to have a meaningful presence, but the others have an insignificant position. Here is the positioning in the state of the top 12 MSOs by revenue: 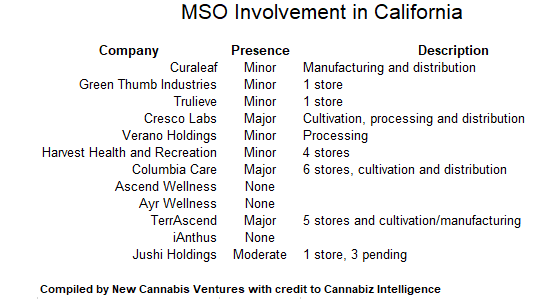 Only three of the largest MSOs have what we consider to be a major focus on the market, while three have none. Of course, several smaller MSOs have a strong focus on California, like MedMen, Plus Products, Hollister Biosciences and Body and Mind, and Planet 13 is set to become an MSO when it opens its dispensary in Orange County on July 1st. There are also several single state operators focused on the market, like The Parent Company, Glass House, Harborside, Lowell Farms, Next Green Wave, Vibe Growth Corporation, Captor Capital and GABY Inc., among others.

We are surprised that several of the largest MSOs haven’t yet taken a more meaningful position in the state. Acquisition prices have seemed rather low. This past week, Harborside indicated that its pending acquisition of Sublime was at 1.7X 2021 projected revenue. Columbia Care has closed two acquisitions in California at low multiples, including Project Cannabis at 1.3X projected 2020 sales last year and a San Diego dispensary at 1.2X projected 2021 sales earlier this year. GABY Inc, described its Mankind dispensary acquisition as being about 1.2X trailing revenue.

California remains a challenging market, but, after a long period of stagnation following the simultaneous rollout of regulated medical and adult-use cannabis in 2018, the revenue growth has really taken off. According to BDSA, sales in April grew 42% from a year ago, the strongest gain to date, as they hit a record $357 million. Here is the annual rate of growth by month: 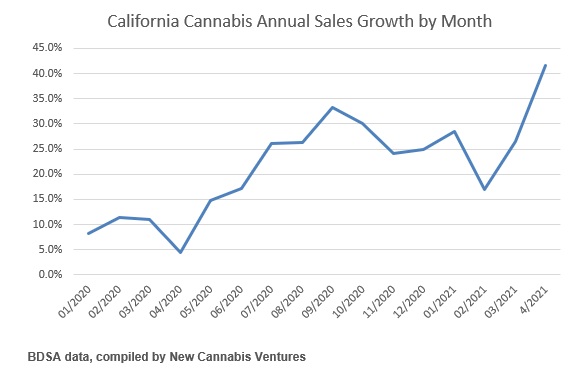 We remain excited by the prospects for California and continue to expect some of the larger MSOs to get more deeply involved in the state. The pending acquisition of Harvest by Trulieve will leave it with a larger presence, and perhaps it will expand its “Western Hub” to include a greater emphasis California. GTI has been vocal about its reluctance, while Curaleaf appears to be more interested in increasing its exposure. For those investors who want exposure to what many call the largest cannabis market in the world, there are many options, but some are more leveraged than others. There are several pure-plays, some of which could be acquired in the future, and there are a few MSOs with meaningful positions in the state already. 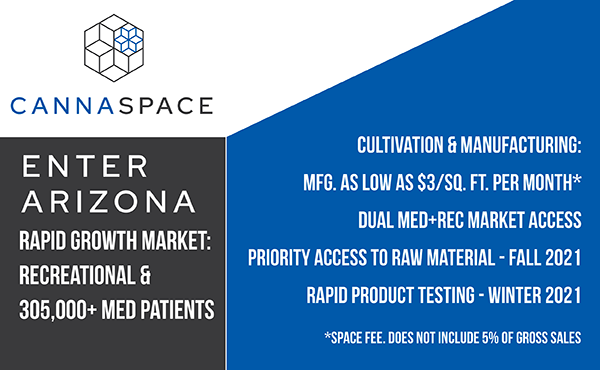 Cannaspace partners will need to demonstrate quality control, compliance, and experience in regulated American cannabis production operations. Cannaspace is operated by the expansion-focused iLAVA management group. The group started operations in 2013 and currently runs The Downtown & D2 Dispensary stores and an industrial cultivation & production facility with 200+ employees in Tucson, Arizona.

Agrify Is Tackling the Tough Challenge of Cultivating Cannabis Consistently