Attitudes toward gender equality have continued to improve, especially toward marriage equality, with more than 60 percent of people now agreeing that same-sex couples should have the right to marry, an Executive Yuan survey found ahead of today’s two-year anniversary of Taiwan’s marriage-equality legislation.

The Cabinet’s Gender Equality Committee yesterday announced the results of its annual telephone survey on attitudes toward gender issues.

A total of 5,871 couples have registered marriages from May 24, 2019 — when the Legislative Yuan legalized same-sex marriage — to April 30, the committee said. 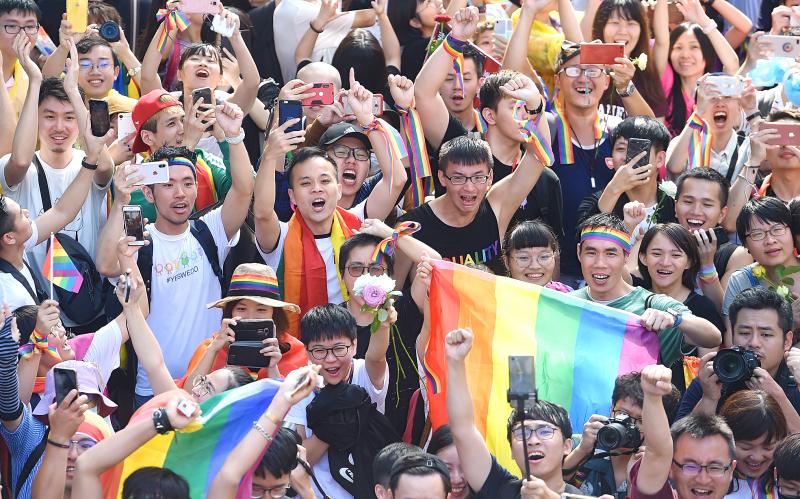 The survey showed that support for marriage rights has continued to rise, with 60.4 percent of respondents expressing support compared with 52.5 percent last year, it said.

The figure also represents a significant increase of 23 percentage points from before legalization in 2018, when 37.4 percent of respondents agreed with the statement, it added.

To the question of whether same-sex couples should be able to adopt children, 67.2 percent of respondents agreed, and 72.2 percent said that same-sex couples are just as capable of raising children as mixed-sex couples, up from 68.7 percent last year, the survey found.

These results show that the right for same-sex couples to start families is gradually gaining recognition and acceptance among the public, the committee said.

Attitudes toward transgender issues have also shown improvement, it said.

The committee said that 65.1 percent of respondents said that they were willing to share a public bathroom with trans people, up 3.1 percentage points from last year, it said.

Meanwhile, 76 percent agreed that trans people should be able to dress however they feel most comfortable while at school or in the workplace, while 88.9 percent said they were willing to work with transgender colleagues, the survey showed.

Gender stereotypes are also gradually loosening, including the beliefs that women are responsible for housework and are not suited for scientific jobs, the committee said.

Eighty percent of respondents disagreed with the statement that “a wife should spend more time on housework than her husband,” up 3.9 percentage points from last year, the survey showed, while 93.7 percent disagreed that women are not suited to studying science and technology.

Meanwhile, 89 percent said that women are just as capable of holding senior management positions, while only 35.7 percent agreed that men are more suited to working as bus drivers, down 5.9 percentage points from last year, it showed.

The survey reveals the progression in national attitudes toward gender each year, the committee said, vowing to continue promoting measures aimed at creating a more just society.

In related news, the Taiwan Alliance to Promote Civil Partnership Rights yesterday called on the government to write marriage equality into the Civil Code, as a 2018 referendum barring such an amendment is set to expire today.

Bound by a Council of Grand Justices decision that ordered the legalization of same-sex marriage and a referendum banning a Civil Code amendment to do so, the Legislative Yuan in 2019 passed a separate law to legalize same-sex marriage: the Act for Implementation of Judicial Yuan Interpretation No. 748 (司法院釋字第七 四 八號解釋施行法).

However, the act left a number of discrepancies in the rights enjoyed by same-sex and mixed-sex couples, failing to legalize certain transnational marriages, adoption of unrelated children and artificial reproduction for same-sex partners, among other rights.

Over the past two years, Taiwanese society has become enriched by the appearance of more diverse families, yet there have also been a number of lawsuits fighting for equal marriage rights, the alliance said.

The two-year validity period of the referendum is about to expire as stipulated in Article 30 of the Referendum Act (公民投票法), it said, adding that starting from now, the government has the chance to amend the Civil Code to fill in the gaps and make marriage truly equal.

Comments will be moderated. Keep comments relevant to the article. Remarks containing abusive and obscene language, personal attacks of any kind or promotion will be removed and the user banned. Final decision will be at the discretion of the Taipei Times.

Bill that would close loophole on 'marijuana-lite' moves through Michigan Legislature - UpNorthLive.com