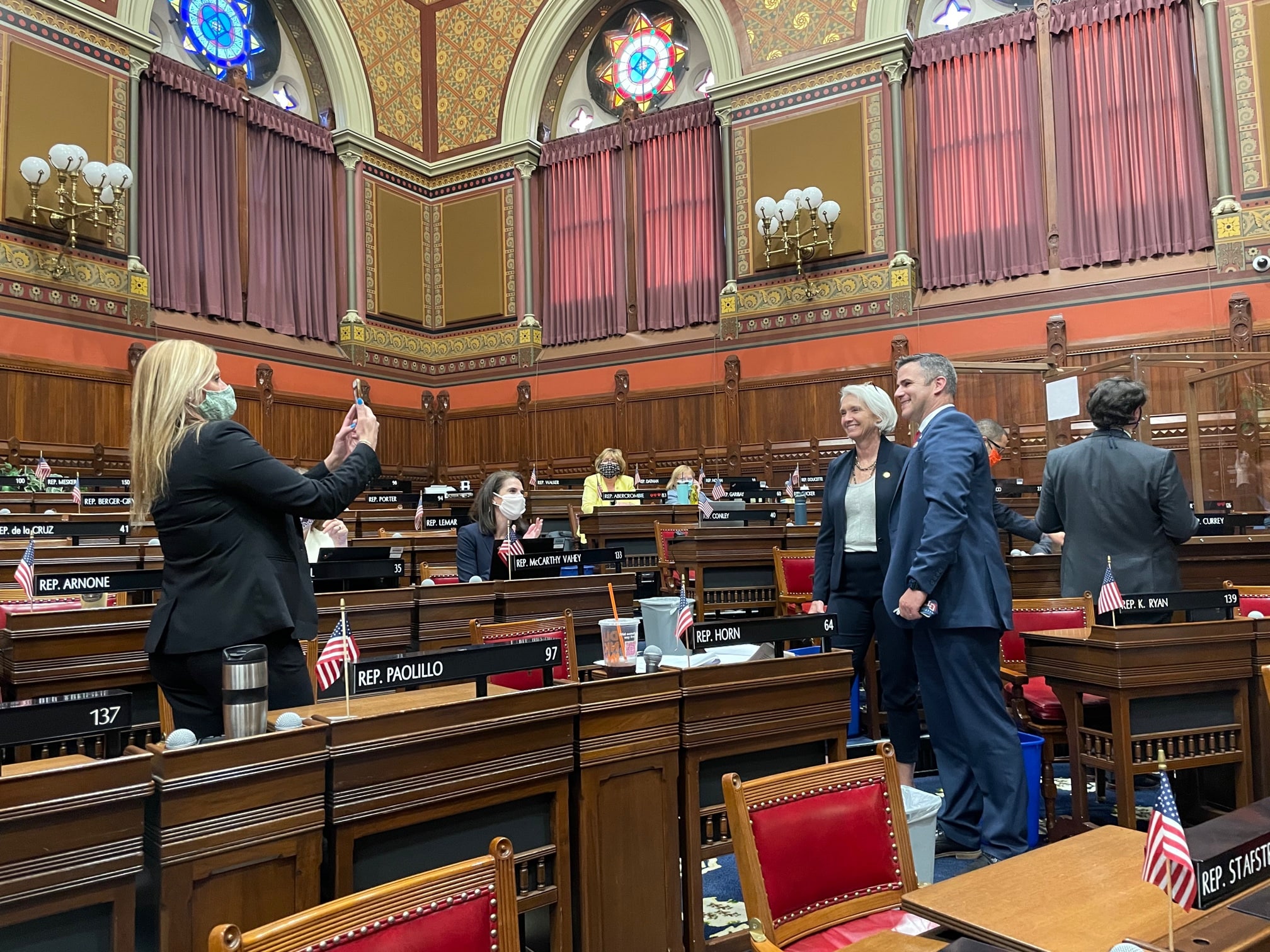 Reps. Maria Horn, D-Salisbury, and Rep. Greg Howard, R-North Stonington, celebrate bipartisan passage of the bill they brought out to the House.

Connecticut reached a tipping point in its long, complicated relationship with gambling Thursday as the House voted 122-21 for a bill that would make casino games, sports betting and lottery sales available to any adult with an internet connection.

After years of false starts, the measure is the first comprehensive update of gambling laws since the state’s two federally recognized tribes opened Foxwoods Resorts Casino and the Mohegan Sun in the 1990s.

It authorizes the CT Lottery and the two casinos to take sports bets and the casinos to offer virtual versions of slots and table games, a source of new revenue for casinos battered by COVID-19 and competition.

The overwhelming vote in favor reflects a cultural and political shift in a state that barred the sales of liquor on Good Friday until an adverse court ruling in 1981 and clung to Sunday blue laws into the new millennium.

Passage in the Senate and the signature of Gov. Ned Lamont are sure bets. When it becomes law, amendments to the state’s compact with the tribes, the Mashantucket Pequots and Mohegans, will be reviewed by the Department of the Interior.

“I look forward to this measure’s swift passage in the Senate, so we can start the federal process of ensuring this legislation and agreement is authorized,” Lamont said.

Lamont struck a deal in March with the tribes, who insisted their exclusive rights to casino gambling included sports betting. In 2018, the U.S. Supreme Court struck down a federal prohibition on sports wagering, prompting the rapid legalization.

“More than half the states in the country have taken action to legalize it,” said Rep. Maria Horn, D-Salisbury, who led passage as the co-chair of the Public Safety and Security Committee. “And I would wager that a large chunk of people in this chamber, much less people in Connecticut, have engaged in sports betting in some way.”

But expansion has been an issue even longer, prompted by the prospect of competition in Massachusetts, Rhode Island and New York.

“It’s been five years in the making, and I think today is a great day for the state of Connecticut,” said Rep. Greg Howard, R-North Stonington.

The goal is to have a framework in place by the start of the NFL season for placing bets on sports at the casinos, 15 brick-and-mortar locations controlled by the lottery and online. The state expects to collect $83 million in taxes annually: 18% initially on online casino gambling, increasing to 20% after five years; and 13.75% on sports betting.

Sports betting and online gambling would be open to anyone 21 and older, but only if the gambler was in Connecticut.

Sportech, the operator of off-track betting in Connecticut, was shut out of the deal, but it is expected to be offered licenses by the CT Lottery to operate brick-and-mortar sites.

Horn delivered on a promise to add consumer protections to a Lamont administration bill that was silent on what safeguards might be imposed on gambling that would be available 24/7 on any smartphone.

“There is no question that the expansion of gaming lowers the barriers to entry in a way, because you no longer have to physically go to a casino,” Horn said. “You will be able to game on your phone. But with that actually goes the ability to have enhanced protections.”

Reflecting a deal the Lamont administration struck with the tribes, each of the casino owners will contribute $500,000 annually to support problem gambling programs. The lottery will increase its contribution by $1 million, to $3.3 million.

But more than the money, the bill outlines a framework for safeguards, such as periodic reminders of how long a gambler has been online, limits on credit and the ability to self-exclude, Horn said. The Department of Consumer Protection will develop a regulatory structure.

“There are to be clear displays on your phone, whatever device you’re using to to do online gaming, clear displays of the amount of time spent, means to initiate a break at play and display the amount of money available, as well as self-exclusion programs,” Horn said, describing them as a way to “hopefully catch addictive behavior before it goes too far.”

Betting on UConn and other college teams in state will be barred, with an exception for brackets in NCAA tournament play.

The bill stops short of the aggressive requirements in Massachusetts for the long-term tracking of gambling habits, nor does it create a gaming commission with the single mission of overseeing the industry. The Department of Consumer Protection, where gambling oversight is one of seven divisions, will remain as the regulatory authority.

House Minority Leader Vincent J. Candelora, R-North Branford, said in an interview that passage was inevitable once the governor and the tribes came to terms.

“I think COVID played a role in the impact of our casinos, that there’s a vested interest in keeping them alive,” Candelora said. “I think, myself included, we have a greater appreciation for the number of jobs that they offer to eastern Connecticut. And so I think that sort of psychologically helped push the bill into an agreement.”

Horn said the pandemic and the threat to the economic stability of the casinos — both tribes carry enormous debt, and the Pequots have struggled to meet even their restructured obligations — simplified what had been a complex issue.

“That focuses their minds. There were a lot of people who were thinking about some idealized transaction before, who now were ready to sit down together in a room and craft a deal. And I think that’s ultimately what happened,” Horn said before the debate.

Her vice chair, Rep. Al Paolillo Jr., D-New Haven, said, “I think there was a clear feeling on all sides that this was the year.”

Rep. Anne Hughes, D-Easton, the chair of the progressive caucus, told colleagues during the relatively brief debate that concern over the efficacy of safeguards against problem gambling was a reason for her opposition. Of online gambling, she said, “It is designed to be particularly addictive.”

Several of the opponents were lawmakers from districts in and around East Windsor, the site of a casino the tribes were authorized to build in 2017 to compete with MGM Springfield. The tribes never broke ground, as the market for new casinos weakened. The bill suspends the authorization for 10 years.

The bill creates a licensing process for fantasy sports, which have been offered by DraftKings and FanDuel in Connecticut for a decade under what Horn called “murky” legal circumstances. One wrinkle in including them: Once the measure becomes law, it appears DraftKings and FanDuel will have to suspend operations in the state until regulations are adopted and licenses issued.