SNOWFLAKE, Ariz. — The Latter-day Saints temple looms over the landscape, its smooth granite exterior bright in the high desert sun. At the top, a golden angel glimmers in the light.

Across the quiet highway from the temple is a 40-acre greenhouse that locals refer to as “the marijuana farm.”

Phoenix is a three-hour drive away. They call it “the Valley” here, 5,600 feet above sea level. Though only some 6,000 people live in Snowflake, the temple draws more than six times that number, from as far away as New Mexico.

Officially, the cannabis company is called Copperstate Farms. It is partly owned by Fife Symington IV, the son of a former governor of Arizona, and it bills itself as the largest wholesaler of cannabis in the state. It could be the biggest greenhouse dedicated exclusively to cannabis in North America.

In 2015, Symington heard that the greenhouse owner at the time, NatureSweet, was having a tough time with its local tomato-growing operation and had opted to leave Snowflake. Symington decided the greenhouse had to be his.

But before he could grow anything, Symington had to convince the locals.

Resistance ran deep. Lynn Johnson, now the mayor of Snowflake and a member of the church, was on the City Council at the time.

“A lot of people were very upset,” Johnson said. “Here we are, [a Church of Jesus Christ of Latter-day Saints] community, and we have the biggest marijuana farm in the world. That was a little bit rough.”

Symington had moved to Snowflake in spring 2016 and hired his father’s former press secretary to help him.

“I thought they would burn me in effigy in front of the town hall,” he said.

Symington’s background helped. He had spent more than two decades as the head of a company that grew vegetables in Mexico, and knew a good agricultural opportunity when he saw one: The greenhouse was in Arizona’s White Mountains, with high exposure to the sun, protection from extreme winter weather and access to a large aquifer.

“It was kind of like running a grassroots political campaign,” Symington said. “I talked to everybody who would listen to me. I went to the Chamber of Commerce lunches and to Rotary [Club] breakfasts.” He promised to hire at least 130 people and pay them a starting wage of $15 an hour. Over and over, he said he was not asking anyone to adjudicate whether marijuana should be legalized; that was up to the state.

He knew that the consumer demand for marijuana was there. Arizona had legalized medical marijuana several years earlier, and by the end of 2015, nearly 90,000 state residents had joined the program, according to the Arizona Department of Health Services. (That number has more than tripled since.)

The town held several public hearings. Opinions were mixed. Some people worried that products cultivated in the greenhouse would make their way into the community; others were concerned that marijuana was still illegal on a federal level. A few suggested having a referendum instead of allowing the City Council to make the call.

Barbara Hansen, who is now a manager at Copperstate Farms, spoke in favor of the marijuana farm, according to the minutes from one hearing.

“People talking about the impact on kids need to address their concerns at home,” she said at the meeting. “If they are going to do drugs and cannot get their hands on marijuana, they will pull them out of parents’ medicine cabinet, and the drugs there are more damaging and addictive than marijuana.”

Mary Law said the arrival of marijuana in Snowflake reminded her of “Satan’s words ‘You can buy anything with money.'” She added: “If we oppose these plants, the Lord will bless us and better businesses and more jobs will come into the community.”

‘PUT ON THIS EARTH’

There was another religious interpretation. Dave Haws spoke up to say that cannabis was “put on this earth by the Lord,” making it “no different than every other plant.”

In the end, the need for jobs kept resurfacing in arguments that favored the facility. The greenhouse had been an employer for decades.

Bernie and Krista Nauss, a couple who won millions in the Canadian lottery, established it in the late 1990s to grow tomatoes. (Though they did not grow marijuana there, Bernie Nauss was fined 25,000 Canadian dollars for growing weed in his basement in 1998, according to The Toronto Star.)

The couple sold the greenhouse to Eurofresh, a produce grower, which filed for bankruptcy and was acquired by NatureSweet, a tomato company.

NatureSweet didn’t stick around for long. The tomato company’s exit came in 2015, and followed another difficult moment for the town’s economy: the closing of a paper mill in 2012. By the time Symington came around, Snowflake was in the market for a big, steady employer. Some townspeople were not impressed by the base pay of $15 an hour that Copperstate Farms promised, but at the time Arizona’s minimum wage was practically half of that.

“Fifteen dollars is better than nothing,” Johnson said.

In the end, Johnson voted against Copperstate Farms, but the majority of the City Council was won over and approved the permit.

The farm now employs 365 people from the Snowflake area. Overall, cannabis companies in Arizona employ more than 20,000 people, according to Leafly, a trade publication.

Before joining Copperstate Farms as CEO, Pankaj Talwar worked at Procter & Gamble and at George Weston Ltd., which owns brands including Wonder and D’Italiano.

Arizona voted to legalize recreational cannabis in November, and dispensaries, including four run by Copperstate Farms, have already started selling products to people 21 and over.

Impressed by Symington and by the growth of his business, Johnson has changed his mind about the presence of Copperstate Farms in Snowflake. Last month, the town council gave Copperstate Farms the green light for another 40 acres, with Johnson on the supporting side. With the planned greenhouse expansion, Copperstate Farms expects to hire at least 40 more people.

Not everyone has been won over.

Daliah Flake, whose great-great-great-grandfather was one of the town’s founders, volunteers at the Stinson Pioneer Museum in Snowflake. On a Thursday morning last month, she explained the town’s history while showing a visitor the black-and-white photos of her family that hang on the museum’s walls, a loom used by one of her ancestors and a book that records the deaths of Snowflake’s residents, dating back more than 100 years.

She said she is worried about how the marijuana farm will affect the town’s future.

“I understand the medical use, but now there’s recreational use, too,” Flake said. “That brings a whole different set of troubles.”

Her boss, Sarah Brimhall, president of the Snowflake Heritage Foundation, popped in for a few minutes. She complained that sometimes, when she used to go on walks, she could smell the cannabis wafting from the farm.

But that’s rare these days, she said, and she has mostly accepted the farm as a town fixture.

“Do we want everybody to work at a marijuana farm? No,” she said. “But people have to work.” 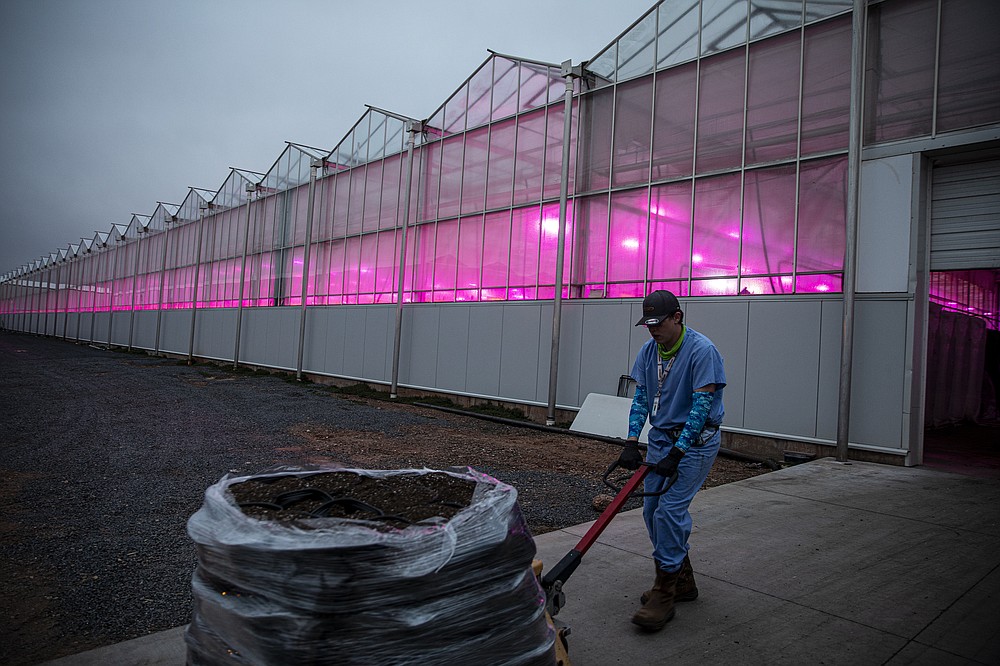 A worker outside the Copperstate Farms greenhouse in Snowflake, Ariz., March 23, 2021. Locals refer to the 40-acre greenhouse as “the marijuana farm.” (Adriana Zehbrauskas/The New York Times) 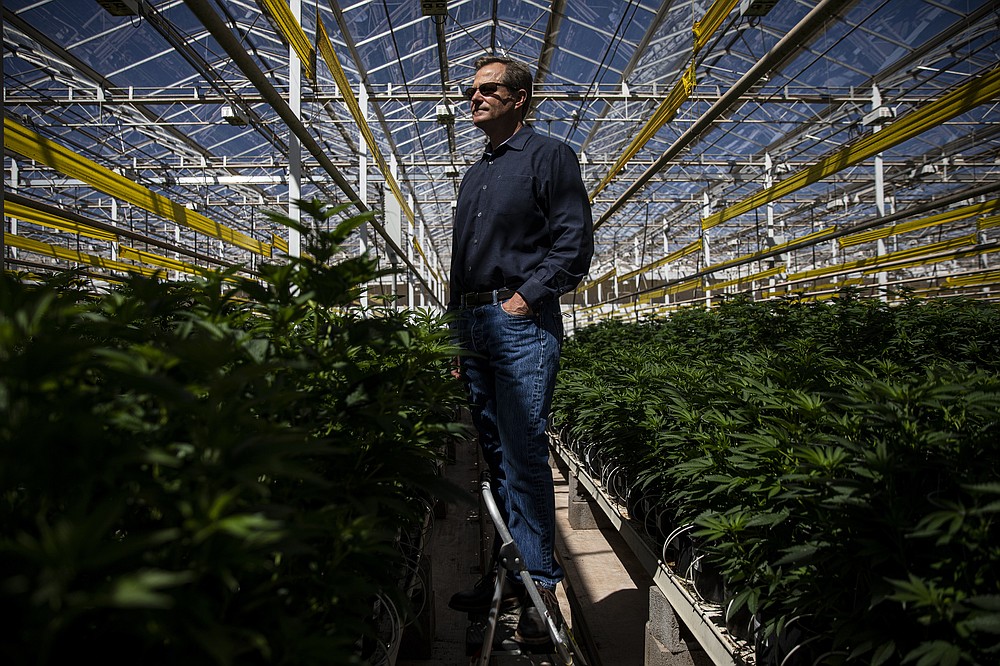 Fife Symington IV, a partial owner of Copperstate Farms, a cannabis company in Snowflake, Ariz., in the company’s greenhouse on March 23, 2021. Copperstate Farms bills itself as the largest wholesaler of cannabis in the state — it may be the biggest greenhouse dedicated exclusively to cannabis in North America. (Adriana Zehbrauskas/The New York Times) 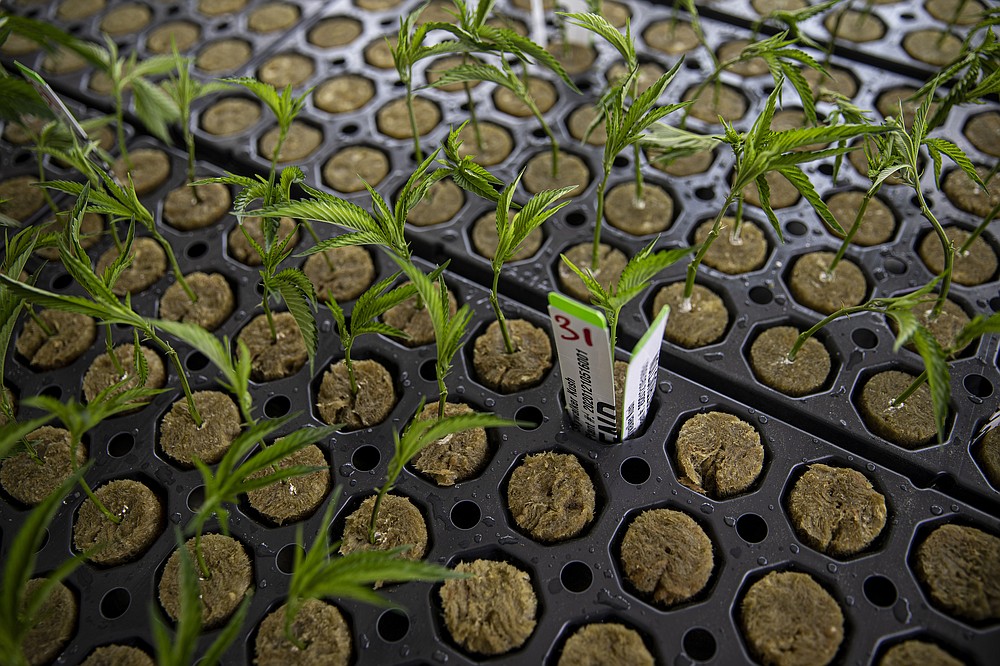