It is the smell that visitors notice at the facility on Hershey Drive, in Smiths Falls, Ontario. And it is nothing to do with the chocolate factory — the first Hershey’s outside Pennsylvania — that was once on the site. It’s the smell of cannabis as, today, the building is home to the world’s largest corporate producer.

Canopy Growth arrived in Smiths Falls in 2014, four years before Canada legalised recreational marijuana use, and it employs 1,300 people at its growing and processing plant.

Although the sector has so far failed to live up to its pre-legalisation hype and staff are being laid off — including 75 at Canopy in March — the company’s arrival “has been a significant part of the transformation of our community”, says Shawn Pankow, the town’s mayor. “The long-term sustainability of Canopy as an employer in our town is our number one priority,” he says.

But while legalisation sparked a “green rush” on the Toronto Stock Exchange, profits in the sector have proven elusive — drawing a comparison with the dotcom boom and bust. Some 1,000 tonnes of marijuana sit unsold in warehouses. Still, producers, retailers and analysts say the industry is moving in the right direction. 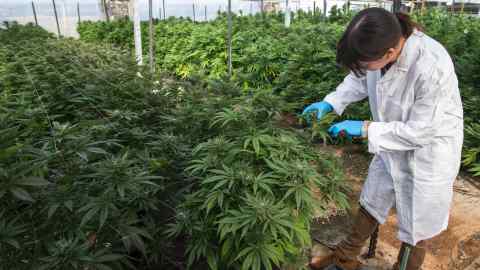 “This has always been a volatile space of the market to invest in,” says Graeme Kreindler, lead cannabis analyst at Eight Capital, a Toronto brokerage. “You have people doing something that has really never been done before, which is trying to grow cannabis at an industrial scale.”

Canopy saw its stock price slide within a year of legalisation, prompting warehouse closures and lay-offs. The Horizons Marijuana Life Sciences Index fund — the first exchange traded fund to invest in cannabis companies — also fell in value, and remains almost 60 per cent below its 2018 peak.

The main problem was a lack of stores, particularly in populous Ontario, where a licensing lottery saw the tiny town of Innisfil awarded three shops on a single street while other towns missed out. With few stores and high prices, consumers stuck with the illicit market.


The value of the cannabis market. It is expected to reach C$8bn

“The lottery threw a bit of a wrench in our plans to expand rapidly in Ontario,” says Raj Grover, chief executive of High Tide, which, with 77 stores, is Canada’s leading cannabis retailer. “I was a little shocked to see the time that it’s taking to erode the illicit market share.”

But the situation is changing. About 50 locations a month are now opening in Ontario, and prices have fallen 20 per cent since legalisation because of the fierce competition among hundreds of licensed producers. Smiths Falls, which has one cannabis store, will soon welcome two new outlets, Pankow says.

Last year, the legal market overtook illicit sales and accounts for 56 per cent of sector turnover, Kreindler says. Overall, the sector has annual sales of C$2.6bn ($2.1bn), and he predicts this will grow to C$8bn-C$10bn when the market reaches maturity.


The number of cannabis stores opening each month in Ontario

“The producers are doing a good job at putting some really high quality product on the market, at attractive prices, because they’ve had to,” says Grover. Having started with one marijuana accessories store in Alberta in 2009, his company is now in the process of listing on Nasdaq.

Cost remains an issue, analysts say, and with little brand loyalty, producers are consolidating. In April, Canopy announced the purchase of Supreme Cannabis, while Tilray and Aphria, two industry leaders, have merged.

And for small high-quality producers, eking out a profit remains tricky. “Everyone focused on funding and it really let the quality of the product fall short,” says Kayla Mann, chief financial officer of Habitat Craft, which uses aquaponics — a process involving nutrient rich water — to farm organic salmon and high-grade cannabis. Now, she says, “everyone’s racing to the bottom on price”. 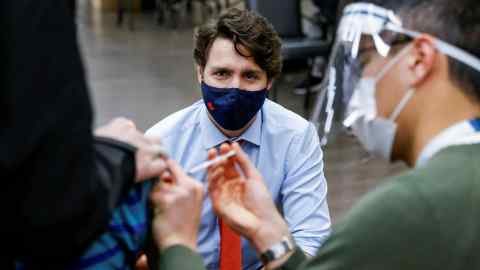 Habitat Craft recently raised C$1m to expand and hopes to become profitable this year but is relying on fish to subsidise the cannabis side. Meanwhile, competition looms from Mexico, which is tipped to legalise marijuana for recreational use and has lower labour costs and warmer growing conditions.

Cannabis stocks also remain volatile. Prices surged after Joe Biden won the US presidency, bringing the possibility of US legalisation. Gains were short-lived, though: Tilray’s Nasdaq-listed shares peaked above $60 in February before falling below $20, while Canopy Growth’s topped C$60 but then slipped one-third. “It’s largely a sentiment-driven, retail herd that’s not necessarily as discerning as in other industries,” says Kreindler of the investor base.

Even so, with prices falling, quality improving and products such as edibles in development, analysts are bullish. In Smiths Falls, residential construction is at a five-decade high and a new type of tourist is expected once the pandemic ends. “Without Canopy, we would not be at this stage,” says Pankow. “It puts Smiths Falls on the global map.”

Letter to the Editor: Weed through the inconsistencies of medical marijuana